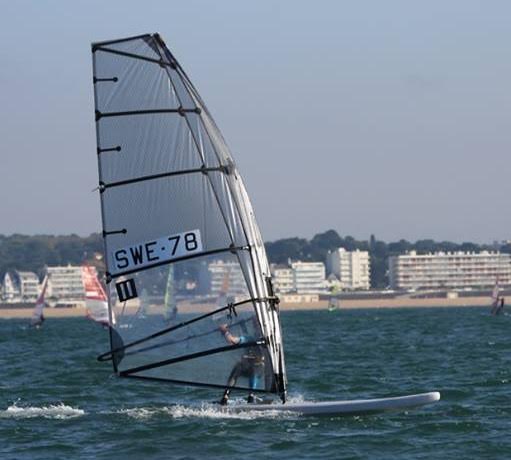 The D2 European championship in Brest was a really good competition. On the way home to Sweden I discussed improvements with my friend Rikard but the problem was if there were any more D2 regattas this year. I wanted to change my board and rig a bit and get it tested against the best sailors. I got big help from Fred Bequart, Florent Lambert and Alain Cadre keeping me updated about French Nationals in La Baule. Finally it looked like it could be a very good competition. It is 2000 kilometers plus one night on the ferry from Sweden so the thing that finally made me decide to go was that my son would join and get some excellent RSX competition. We arrived on Thursday lunch and went sailing with Francois Leduey, Alain Cadre and Gilles Tanguy. I was testing a wider centerboard than the one I am used to and it felt good but not as lively as my narrow one so I decided to use my old next day.  Registration went on without problems and I was glad to see nine D2 competitors. The feeling is really good between sailors with a touch of reunion, family and sharp racing. First racing day was Friday with sun and 1-3 knots of wind. We started together with raceboards. Pumping was free and that felt ok. The course was a kind of stretched RSX style as follows: start- upwind mark- downwind mark- upwind mark- reaching mark- downwind mark- reach to finish line. I liked the course and it worked out excellent to race together with raceboards. I was behind from the start, tired after the long trip and maybe I should have taken my wide centerboard to avoid stalling upwind. Didier Boujean was very fast and also tacked correct on the shifts. Alain also went fast and the right way. I finished 7:th far away from the top sailors. My analys was that next time in 1-3 knots I will use a wider centerboard, softer mast and get more rest before racing.  The wind died and racing was cancelled for the day. Day two we had 10-14 knots of wind. I had slept 12 hours and eager to compete. We made four races. I was a little bit behind in the starts but worked my way up in each race. Alain Cadre showed excellent balance with good speed and tactical tacking upwind. I got better after each race and began closing the gap to Alain, especially downwind. I finished 2,2,2 and in the fourth race I took the lead at last upwind mark. On the downwind I felt fast and gybed before Alain into the middle of the course and  ended in less wind. Alain went to the right corner with more wind and finished first again. So Alain had four first places and I had four second places after day two. In the evening we got invited to dinner with Francois, Gilles, Alain, Florent and Georges. My son had to rest but I had a wonderful time and I was glad that Florent could translate the dinner conversation.  Sunday was last day of racing and the forecast promised 20 knots of wind. As usual I was a bit behind in the start but advanced through the field. I was second after Alain at last upwind mark but this day I had learned from yesterdays mistake and with fantastic downwind speed I managed to finish first. Second race had a little bit more wind and I with good speed I won again. I wanted to race more but they only let the RSX do three races so we went ashore. In summary Alain had 111122 and I had 222211 so Alain won and I was proud on second place with Didier Boujean on third place. I got my test of the improvements and a very nice time among fantastic sailors. I am really looking forward to more D2 events and hope the class will grow.

Here is what Jonas has to say about his proto:

“The new boards have a totally new design. With the 8,5/9,5 sails it is possible to rail upwind and plane downwind in lower windspeeds compared to the old 6,5 sails. This makes it possible to design the hull for higher speed but still with round bortom all the way back to the stern. The new boards have new position for centerboard and mast-track”

“The prototypes are made of glassfibre and epoxy with a core of expanded polystyren. The weight is 16kg (without fin and centerboard). It is possible to make a lighter board with prepreg and honeycomb but that is if we should start production”